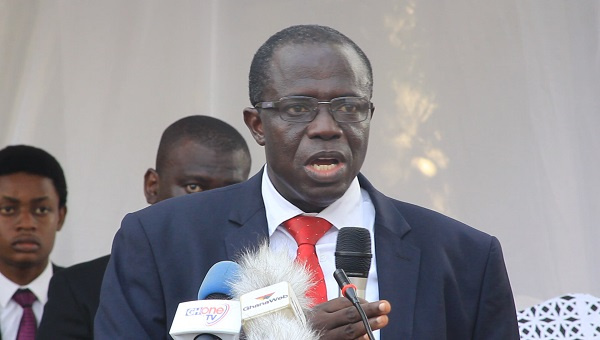 Justice Sir Dennis Adjei, Justice of the Court of Appeal

Death Penalty is a Mockery of Justice; Abolish it – Court of Appeal Judge

Justice Sir Dennis Adjei, Justice of the Court of Appeal has supported the move by individuals and Civil Society Organizations to abolished death penalty in the country.

According to him the death penalty remains a retributive punishment which makes mockery of justice by not applying equally in all criminal cases, except for murder and subversive crimes.

Justice Adjei made the observation at a stakeholders’ engagement on a proposed bill to amend the Criminal Offences Act (Act 29) and the Armed Forces Act (Act 105) that has death penalty as punishment for certain offences to be converted to life imprisonment.

Justice Adjei also explained the constitution has created two offences which are punishable by death, treason and high treason which are entrenched provisions.

He said orders made by a competent court of jurisdiction are meant to be enforced but over years accused persons sentence to death through hanging have not been executed.

This is because none of the persons ordered to suffer death since 1993 has been killed but continually receives amnesty which converts the death sentence to life imprisonment mostly after ten years.

“We know that the court impose death sentence and not enforce it but wait ten years to convert it to life in imprisonment, aren’t we making mockery of justice,” he said.

Mr Samuel Agbotsey, Campaign Coordinator, Amnesty International Ghana, said upon realizing that the implementation of the Constitutional Review Commission’s recommendation to abolish the death penalty had stalled, the strategy was changed to an advocacy approach grounded on sound legal advice, which now focuses on amending the Criminal Offences Act, Act 29 (1960) to abolish 95 per cent of the provisions relating to the use of the death penalty.

He said this new approach seeks to demonstrate that the quest to abolish capital punishment as a country could be largely achieved without necessarily amending the 1992 Constitution of Ghana.

Mr Francis-Xavier Sosu, Member of Parliament (MP) for Madina, who is supporting the Private Member’s Bill (PMB), stated that the engagement is to solicit the views and inputs of stakeholders on the introduction of two draft bills to abolish the death penalty.

He said the proposed amendment of the Criminal and Other Offences Act and the Armed Forces Act, would help achieve up to about 95 percent abolishing of the death penalty from the country’s statute books.

“The issue of death penalty and the need to abolish it has been something on the minds of most reformers. The last Constitutional Review Commission found it very necessary to propose that the penalty of death needed to be substituted with life imprisonment,” he said.

Mr Sosu also stated that since 2011, the nation has not had the opportunity for this constitutional amendment that allows Ghana to take death penalty from its statute books.

“…But unfortunately the responsibility to amend our laws lie within the domain of Parliament and that it is Parliament which is the legislative arm of government that must take that responsibility,” he added.

Mr Sosu further noted that the advent of the PMB presents an opportunity to MPs with the desire to effect legislative change in aspects of the law to introduce those pieces of legislation through the PMB.

He said the two draft bills were carefully put in place because of some constitutional imperatives since the constitution makes provision for death penalty which is treason and high treason.

“That is why we chose this path which simply seeks to amend the Criminal and Other Offences Act a well as the Armed Forces Act that has death penalty as punishment for certain offences.

“So that when they are amended Ghana would have achieved up to 95 percent abolishing of death penalty and that would also advance the cause of Ghana when it comes to the international community” he added.