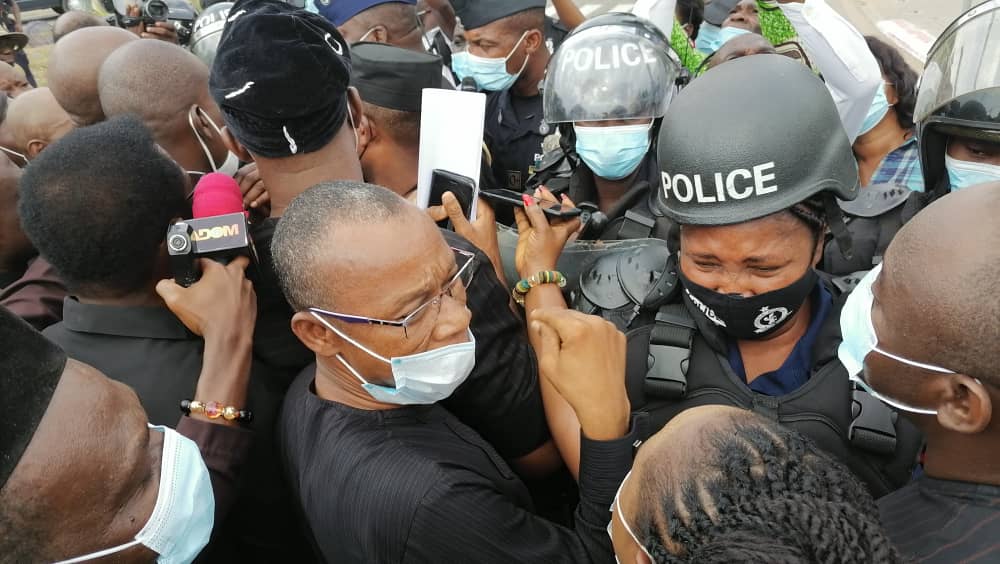 The Minority Caucus in Ghana’s Parliament has clashed with police officers at the offices of the country’s
Electoral Commission as they sought to present a petition to the electoral body over the outcome of the
just ended Presidential and Parliamentary elections.
The main opposition party, the National Democratic Congress (NDC) led by its Flagbearer, Former
President John Dramani Mahama, have rejected the results of the Presidential elections as well as some
constituency results including: Techiman South, Sefwi Wiawso, and Zabzugu, among others.
To intensify the protest which is ongoing across the country, the NDC Minority Members of Parliament
led by the Minority Leader, Haruna Iddrisu, embarked on a peaceful protest march in Accra from the
premises of the Parliament of Ghana to the offices of the Electoral Commission covering a distance of a
little over one Kilometer.
However, the MPs soon came up against a new police barricade mounted about 500 meters away from
the offices of the Electoral Commission which sought to prevent the Legislators from getting access to
the offices of the Commission in order to present their petition to the Commissioner.
The MPs forcefully broke through the barricade and into the armed police officers while calling the bluff
of the police – daring them to shoot at them and kill all of them for the sake of democracy. The group
was however stopped at the entrance of the Commission which was blocked with armored vehicles
amidst heavily armed police personnel.
The Minority Leader, Haruna Iddrisu, had to read out the content of the petition to the media after the
Director of Operations of the Greater Accra Police Command, Superintendent Kwasi Ofori, who was in
charge of the security at the Commission denied the legislators access to the premises of the
Commission.
The Minority Caucus threatened to retaliate the disrespect shown them by the Electoral Commissioner
when she ever comes to Parliament for any business to be done on behalf of the Commission on the
Floor of Parliament, especially the approval of the budget for the Commission.
Members of the NDC have been mounting protests in constituencies across in regions across the
country where the party believes it has been cheated in the elections and it is holding the Electoral
Commission responsible for alleged infractions. They are therefore calling on the Electoral
Commissioner, Jean Mensa, to do the right thing by re-collating the results.
Source: Clement Akoloh||africanewsradio.com