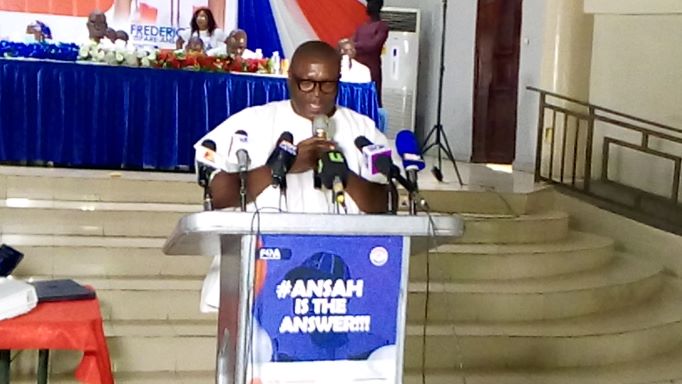 NPP must Close Ranks to Break the Eight – Opare-Ansah

Mr Frederick Opare-Ansah, an aspirant for the New Patriotic Party (NPP) General Secretary has pledged to bring back to the fold party members who have become apathetic, adding that the party cannot downplay such issues in its quest to break the eight.

According to him he would make it a personal business to tour the length and breadth of the country to unearth such people and bring them to join the fight.

Friends of Opare-Ansah, an NPP affiliated group organized a programme at Takoradi where they officially requested him if he was interested in vying for the NPP General Secretary position following persistent calls by the grassroots and supporters of the party for him to vie for the position in order for him to bring to bear his vast experience in politics at the national leadership of the party.

Mr Opare-Ansah then accepted the request of the group and finally declared his intention to compete for the NPP General Secretary position when the party opens nomination later in the year.

“Madam President, on this note I am happy to inform you and everyone here… after due consultations, sober reflections and a deep consideration of the question, I have decided to contest for the position of General Secretary of the New Patriotic Party when nominations open for elections later this year.

“Having been in public service for several years, I see this as a call to duty. A call to help drive the NPP further towards achieving its vision to remain in the service of the nation as the ruling Party. A call to take the NPP back to the electorate to seek the support of Ghanaians to give us the opportunity to consolidate the unprecedented developmental policies that the Nana led NPP government has initiated. I am talking about policies such as TVET, FSHS, ID1F, the new Automotive industry, bauxite processing industry, digitalization of processes and services, to name but a few” he added.

Mr Opare-Ansah also pledged to ensure a clearly defined leadership at the NPP party echelons that would deliver results rather than explaining away issues.

He pledged to ensure that party leaders would be responsive to members interest at all times and members would be able to hold leadership responsible for their actions through institutionalized checks and balances.

Mr Opare-Ansah further pledged to bring on board a new era of tolerance, inclusiveness and openness in the NPP to ensure accountability and good governance.

He said building unity at all levels of the Party would be his hallmark in order to break the cycle of the eight-year term limit.

“Many of you here who know me very well, are aware that I am a very fair but firm person. That is something the Party needs in the present times. I come into the contest on my own strength and not to further the interest of any particular group within the Party. It is my fervent hope, that the wider membership of the Party will accept me for this and allow me to represent their interests” he said.