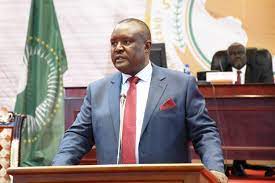 “The APPN congratulates His Excellency Senator Chief Fortune Charumbira, on his election as the fifth PAP President, and his Vice-Presidents, Hon. Prof. Massouda Mohamed Laghdaf from Mauritania, Hon. Dr. Gayo Ashebir from Ethiopia, Hon. Lucia Martia Memndes Goncalves dos Passos from Cape Verde, and Hon. Ango Ndoutoune from Gabon,” a press release co-signed by the Chairman of the Steering Committee, Olu Ibekwe and the Coordinator of the Network, Gilbert Borketey Boyefio, read.

The Network further associated itself with the call by Chief Fortune Charumbira for the PAP to “Put our African people forward and do away with unnecessary conflicts. Together we can achieve more, we will only develop our continent when united and this is an essential thing for our people to see and experience in our lifetime”.

The peaceful atmosphere and well-coordinated manner the just ended Ordinary Session was organized reflects the efforts and progress made by numerous stakeholders spearheaded by the African Union Commission.

The elections follow a stalemate that saw the legislative arm of the African Union failing to choose its leaders owing to differences on modalities of handling the election last year.

The deadlock was resolved by an Executive Council decision in October 2021, which reiterated the adoption of the principle of rotation when electing the leadership of the institution. The decision also charged the Office of the Legal Counsel of the Union to prepare modalities and conduct the elections of the new Bureau of the Pan-African Parliament.

The said Article stipulates that the Plenary Session of the Parliament shall be presided by the Chairperson of the Union on the absence of the Bureau of PAP until the election of the President of the Parliament who shall thereafter preside over entire processes of the institution.

The release also reinforced the commitment of the continental parliamentary media body to support the cause of the Pan African Parliament.

“The APPN reiterates its commitment to work closely with the PAP to increase its visibility and spread the good work they are doing for all African citizens.”