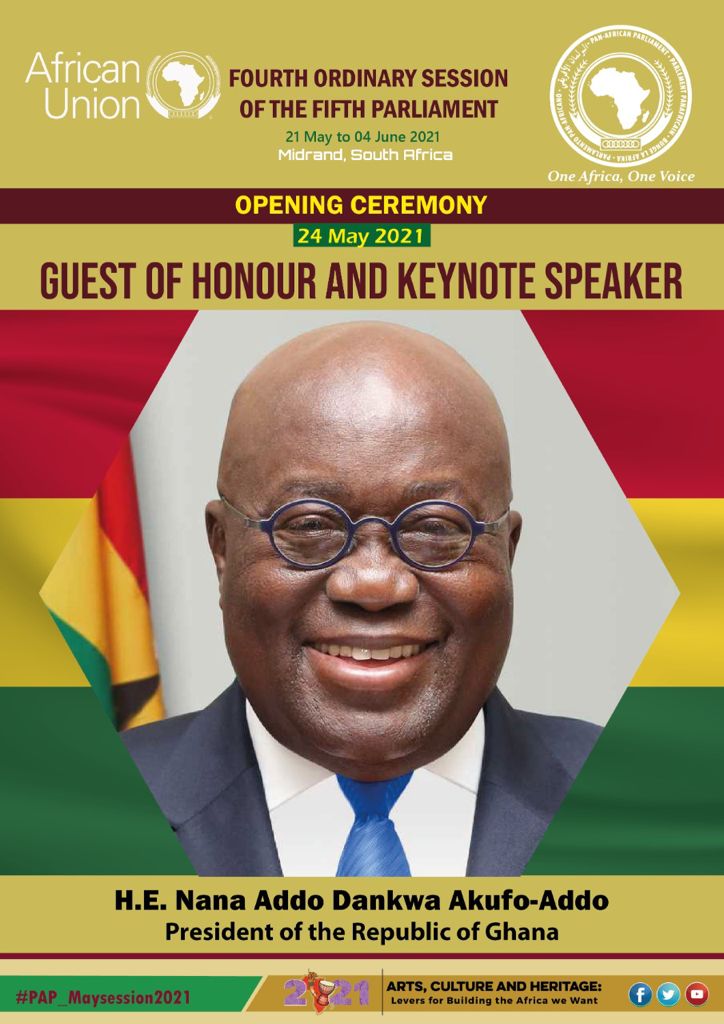 H.E. Nana Addo Dankwa AKUFO-ADDO, President of the Republic of Ghana will be the Guest of honour and keynote speaker at the opening ceremony of the fourth Ordinary Session of the fifth Parliament of the Pan-African Parliament (PAP). The ceremony is scheduled to take place on 24 May 2021 at the PAP precincts in Midrand, South Africa.

President AKUFO-ADDO will address African Parliamentarians as they gather to engage on the African Union (AU) theme for 2021: “Year of the Arts, Culture and Heritage: Levers for Building the Africa We Want.’’

Hon. Chief Fortune CHARUMBIRA, Acting President of the PAP has described H.E. Akufo-Addo as a fervent Pan Africanist, whose presence at the upcoming ordinary session will reaffirm the strategic importance of the PAP as one of the essential pillars to achieve the objectives of the AU.

“President Akufo-Addo’s initiative to reconnect African Americans to the continent was poignant and it is a continuation of Ghana’s history of a Pan-African movement which is central to the progress of Africa and Black people in general. His presence at the next ordinary session, as we commemorate Africa’s culture and heritage, is fitting. We look forward to his message on unity for the social, economic and political progress of the continent as well as the importance of the continent growing together, charting and redefining its own way,” says Hon. Charumbira.

As a reminder, Ghana’s Year of Return in 2019 marked 400 years since the first enslaved Africans reached America. It was also the year Ghana’s President, Nana Akufo-Addo, invited all people of African descent to return to the continent to rethink their identity and reclaim their roots.

H.E. Olusegun OBASANJO, former President of Federal Republic of Nigeria is also expected to deliver a message of solidarity during the opening ceremony. The opening event will further be addressed by H.E. Naledi PANDOR, Minister of International Relations and Cooperation (DIRCO) of the Republic of South Africa and host of the PAP.

The fourth Ordinary Session of the fifth Parliament will include elections for the Bureau that will take the baton from the fifth Parliament on 31 May 2021. At least 100 new delegates from different countries will be sworn in as Members of the PAP following elections in a number of African States and rotation within delegations.