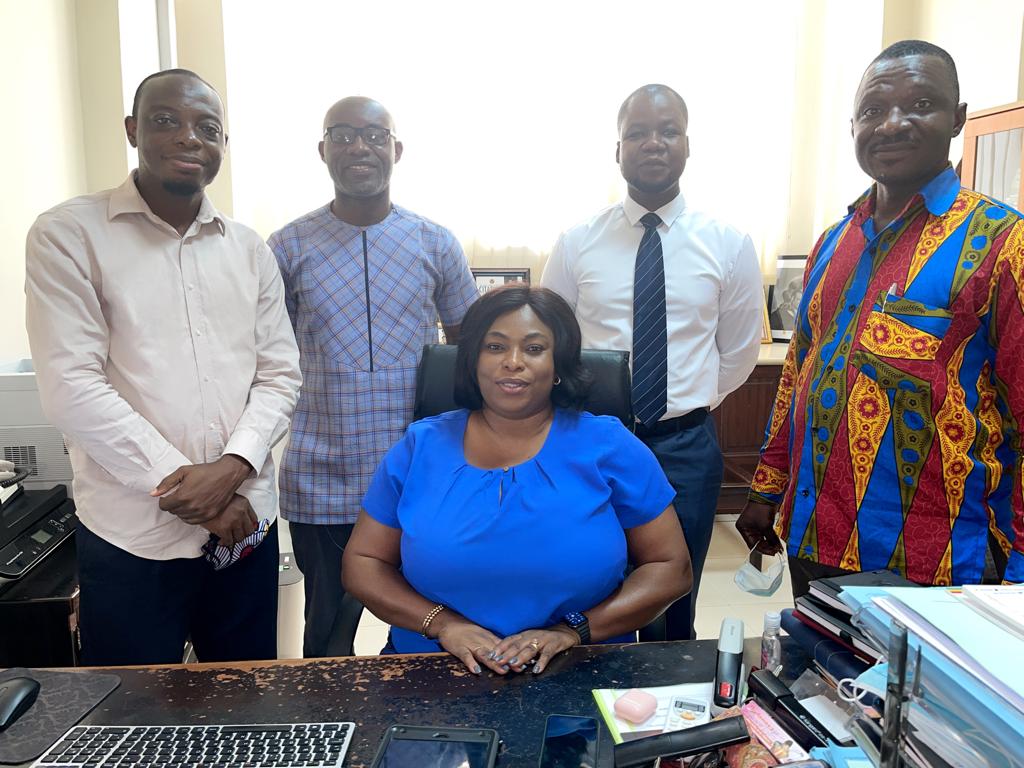 Madam Kate Addo in blue in the middle

The Public Affairs Directorate of the Parliament of Ghana has pledged its full support for the activities of the African Parliamentary Press Network (APPN).

Madam Kate Addo, who heads the department gave the assurance when the newly elected Executives of the Ghana Caucus of the APPN called on her at her office on Monday, March 29, 2021.

The purpose of the visit was to formerly introduce the leadership of the Ghana Caucus of the network to the institution of Parliament in Ghana after a successful election process which saw the election of Mr. Clement Akoloh, the Managing Editor of parliamentnews360.com and africanewsradio.com, as the Dean.

The Elected Executive members were in the company of the Programmes Director for the Parliamentary Monitoring Civil Society Organization, PNAfrica and Coordinator of the APPN, Mr. Gilbert Boyefio.

Madam Kate Addo congratulated the new executives on their election and urged them to use their new office positively to bring honour and respect to Ghana and to compliment the work of Ghana’s Parliament at the continental level.

She lauded the initiative of the APPN spearheaded by PNAfrica, which is a network of Parliamentary reporters across 15 African countries so far. She promised to personally get involved in the activities of the network whenever she is called upon to do so.

According to Madam Kate Addo, the new Speaker of Ghana’s Parliament, the Rt. Hon. Alban Sumana Bagbin, was very receptive to the activities of the media and views shared by Civil Society Organizations, and therefore the move is a very welcomed initiative to the Parliament.

The Dean of APPN Ghana Caucus, Clement Akoloh, on his part, thanked the Director for the tremendous show of confidence in the Leadership of the group and the goodwill from the Parliament of Ghana.

Mr. Gilbert Boyefio, whose outfit hosts the secretariat of the APPN, outlined some of the objectives of the network to include:

Aside the three elected Executives, the Regulatory Framework governing the activities of the network requires that two other Honorary Executive Members are appointed to complete the Executive team.

The Public Affairs Department which acts as a liaison between the media and the institution of Parliament, was required to nominate a member to be part of the 5-member Executive Committee of the APPN to represent the interest of Parliament in the running of the activities of the network in the country.

The Public Affairs Director nominated Mr. Nana Agyeman Birinkorang, an Assistant Public Affairs Officer of parliament as Parliament’s representative on the Executive Committee of the local network. The other Honorary Executive position goes to the Dean of the country’s national Parliamentary Press Corps or Gallery according to the Regulatory Framework of the APPN.