BREAKING NEWS
09:22
Home Politics The Chiefs and People of Fomena want me to work with NPP in Parliament – Estranged Fomena MP 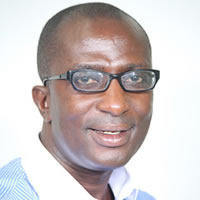 The Estranged former New Patriotic Party (NPP) Member of Parliament for Fomena who was sacked from his party but won his seat as an Independent Candidate, says the Chiefs and people of his constituency want him to work with the NPP in the 8th Parliament despite his rejection by the party prior to the elections.
“From the Chiefs, the Queen Mothers and the good people of the Fomena constituency, this is what they are telling me. In spite of whatever happened, I should still be with the family,” Lawyer Andrews Aamoako Aasiamah said in an interview.
The Fomena seat was declared vacant by Speaker Professor Michael Oquaye after the hierarchy of the governing party had petitioned him to remove the MP for daring to contest the seat as an independent candidate contrary to the party position.
Lawyer Andrews Aamoako Aasiamah was subsequently removed and subjected to public ridicule and intimidation by party members and government assigns prior to the elections.
The soft spoken MP for Fomena in the Ashanti region, who reluctantly granted an interview to the media in Parliament on Wednesday, December 16, 2020, said he has decided to sit with his former party to do business in the next Parliament regardless of the issues that transpired between himself and the party before the December 7, election, which led to his removal from Parliament.
According to him, he has decided to put behind him whatever injustice transpired, and that the focus for him right now is not to join the party per sey, but to work with the party in Parliament to do business for the sake of peace in the national and the party interest.
“For now, I am not talking about the application to rejoin the party. I am talking about Parliament. I am going to be part of the NPP caucus.”
He emphasized that his decision to rejoin the party was not influenced by any demands from him or offers from anybody. According to him, all he wants is for his party to be open and transparent with every process.
“I have never made any request and I am not going to make any specific demands. Probably, what might have brought the party quite down was some of these decisions of protecting this and that. So, if something like that was done to me and I wasn’t happy, why should I also have to request or make such demands? I have never done that.
“What I am looking for is that everything the party does is open and transparent for everybody to see that this is the way we are going. That is just what I am looking for. I am not going to make any specific demands.”
As far as I am concerned, the decision was not fair. What can you do? Its part of life. You take it in your stripes and move on. I don’t have anything against anybody.
When asked whether the party has reached out to apologise to him, he said, “Not yet.”
Source: Clement Akoloh||parliamentnews360.com