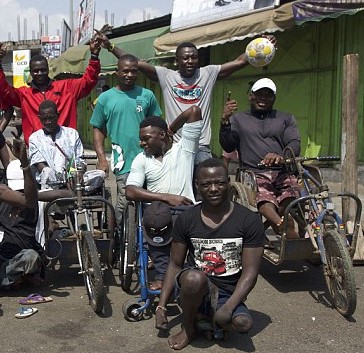 The Department of Social Welfare and Community Development in The Ketu South Municipal Assembly is set to support People Living with Disabilities (PWDs) in the area with various items and cash to the tune of Eighty-Nine Thousand, Forty-Four Ghana cedis (Ghc89, 044.00) budgeted for disbursement as of June, 2022.

Currently, the committee has vetted and approved 102 applications but the money in the account can only take care of 40 people. These people will be receiving their items within this month after procurement of the items is done.

Gideon Nyamadi, head of The Department made this known in an exclusive interview with Edzorna Mensah when he visited him in his office to respond to allegations made by Concerned members of the Disabled in Municipality to the effect that “the registered members of the Ghana Federation of Disables have been denied for so long, the first share of the national cake”.

But the Mr. Nyamadi said, “the allegation made by the group is not true”, also “whenever funds are released into PWD’s account, the committee makes sure that it is disbursed judiciously without any discrimination”.

Stating the fact of the matter noted that, some of the group members who have “already accessed the fund have applied to take it the second time. When they were advised by their own Executive Members who are serving on the Fund Management Committee to allow those who have not benefited so far, to be taken care of, they became angry and started agitating”.

In the statement issued carrying about 80 members and signed by Gator Rabbi, to express their concerns, grievances and the happenings in the Municipality when it comes to the disables alleged that “if a member applies for Five Thousand Ghana Cedis GH¢5,000.00 from the disable Common Fund, you will be given one-third of what you have requested for but the authorities will account with the actual amount you requested for and not the meager sum you received”.

The statement also accused the Assembly and Department of being selective, giving the common fund to their favorite members and “several meetings to solve the issue with the Head of the Social Welfare Officer in the Ketu South Municipality has proved futile”.

“Those who have been representing the disables at the Assembly were appointed since 1993 and many of their corrupt acts and behind the scene dealings are very well known to us and we urge you to step in and privately and objectively investigate and prove our lies or otherwise”, Mr. Rabbi added.

Meanwhile, The Social Welfare and Community Development Department is expected to assist the Assembly to formulate and implement social welfare and community development policies within the framework of national policy of the Country.