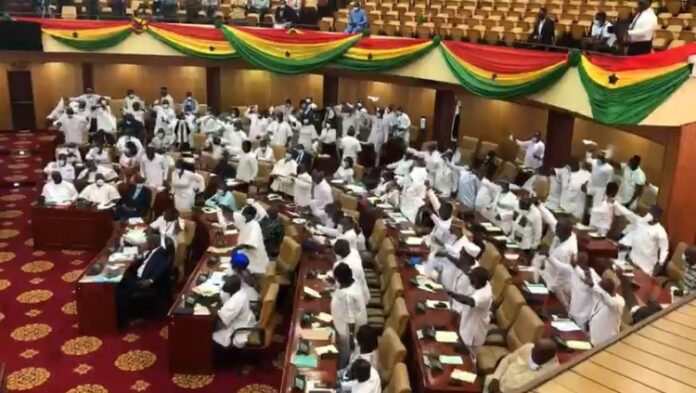 The New Patriotic Party (NPP) Caucus in Ghana’s Parliament together with the Independent Member of Parliament for Fomena, have been declared as the Majority Group of the 8th Parliament of the Fourth Republic of Ghana.

The Speaker of Parliament, Alban Sumana Kingsford Bagbin made the declaration on Friday, January 15, 2021 after reading out at the plenary the written consent of the Independent Member of Parliament for Fomena, Andrews Amoako Asiamah, to do Business with the NPP Caucus.

This declaration should bring to an end the political stalemate that has characterized the atmosphere of Parliamentary work since the inauguration of the 8th Parliament on the 7th of January, 2021.

The two major political parties with representation in the Parliament of Ghana have been jostling each other over the Majority Leadership since neither the NPP nor the NDC had a clear majority of seats to assume the Majority title. It therefore behooved on the Independent MP to tilt the pendulum towards any of the sides he decides to lean following the equal numbers of 137 seats to each side. .

“Hon. Members, with this official declaration to the House, the House would accord him the space to do as he has stated… And so, what we have now, we will have the New Patriotic Party wing or caucus in Parliament together with the Independent Member of Parliament for Fomena, they constitute the Majority Group” the Speaker declared.

This ushered the NPP caucus into a jubilant mood on the Floor of the House as they chanted religious and patriotic songs and showered praises on the Speaker to signal their victory.

The joy of the NPP Caucus was nearly cut short when the Speaker clarified his declaration upon request by the Opposition Leader, Haruna Iddrisu, concerning his determination of the Majority Group.

He stated that no party had any advantage over the other in terms of numbers, so he did not declare the NPP as the majority party. However, since the Independent Member wanted to be associated in the conduct of Business in the House with the NPP wing or caucus in Parliament, they constitute a Majority Group.

“The two put together now constitutes Majority Parliamentary Group. I haven’t stated that the NPP have a Majority in Parliament. I haven’t said that. The word group means more than one, none of the caucus hold majority,” he clarified.

In other businesses conducted in the House, a Report of Leadership on the Formula for the Composition of Membership of Committees and the Committee of Selection was adopted and approved.

A statement on the COVID-Pandemic was also made by the MP for Juaboso, Kwabena Mintah Akandoh.

The House is scheduled to resume sitting on Tuesday, January 19, 2021 at 2PM.