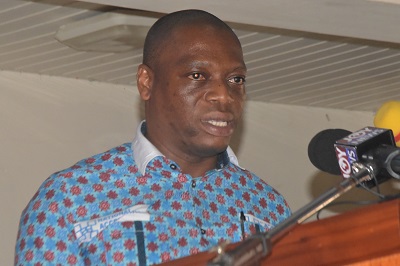 The New Patriotic Party’s Member of Parliament for the Kwadaso Constituency in the Ashanti Region, Dr. Kingsley Nyarko, has waded into the controversy surrounding the resignation of Samuel Okudzeto Ablakwa from the Appointments Committee of Parliament.

According to him, the MPs action was only calculated to score personal political gains in order to look good in the eyes of agitating parting supporters and to foment trouble for the leadership front of the NDC party in Parliament.

The opposition National Democratic Congress’ Member of Parliament for North Tongu, Samuel Okudzeto Ablakwa, announced his resignation from the Appointment Committee by a letter he wrote to the Speaker of Ghana’s Parliament, Rt. Hon. Alban Sumana Bagbin, to affirm his decision.

This followed Parliament’s approval of Ken Ofori-Atta, as President Akufo-Addo’s nominee for appointment as the Minister of Finance for his second term presidential mandate.

The North Tongu MP who indicated in his letter that he would not be available for the vetting of the President’s nominees for Deputy Ministerial Appointments because his resignation was with immediate effect, said the bases for his decision was both personal and on principle.

“This is to formally convey my decision to discontinue my membership of the Appointments Committee after days of careful reflection and thoughtful considerations. I shall like to state that the reasons for this difficult decision are both personal and on principle.” The letter read.

However, Dr. Kingsley Nyarko in an interview with parliamentnews360.com, said the reasons given by the Mr. Ablakwa for his resignation, did not justify his unilateral action which has far reaching implications for the entire membership of the Committee and the leadership of the NDC Party in Parliament headed by the Minority Leader, Haruna Iddrisu.

According to him, the whole resignation matter was ill-timed, given the fact that it was coming just at the back of the approval of the nomination of the Minister for Finance, and also on the heels of popular agitations among the grassroots of the NDC party who have expressed disappointment about the Minister’s approval since they hold the view that he has so far performed abysmally in handling the economy.

“What Ablakwa has done is just breaking the rank of the Minority in Parliament, especially the Leadership. What I am saying is that, he is fomenting trouble within the leadership of the party in Parliament. He is setting the leadership in Parliament against the party national executives and their supporters. That is what Ablakwa is deliberately doing for his own reasons. He wants to look nice in the sight of the NDC base,” he indicated.

Meanwhile, the leadership of the NDC Minority group in Parliament led by its leader, Haruna Iddrisu, is already having challenges with the grassroots of the party since their high expectations of the group to stand toe-to-toe with the governing NPP Majority group because of the parity of the number of seats between the two rival parties in Parliament, seems to have been dashed.

Regarding the grassroots position held against the Finance Minister, and which seems to be reinforced by the resignation, Dr. Kingsley Nyarko observed that both Mr. Ablakwa and the NDC grassroots have not been fair to the Minister since he was on top of the economy until COVID-19 pandemic kicked in. Adding that there was no record of Mr. Ablakwa’s objection when the Committee he was part of decided to approve the Minister by consensus.

“The question is, didn’t you decide unanimously by consensus to approve the nomination of Ken Ofori-Atta? You didn’t object to it. Then because there is uproar from your party members, you are doing this? You write to the Speaker?”, he quizzed.

For him, if he didn’t discuss his resignation with his leadership before sending the letter to the Speaker, would amount to disrespect and undermining of the leadership. And would further confirm that he only did it to pander to the unreasonable demands of the base of the party for his own gains.