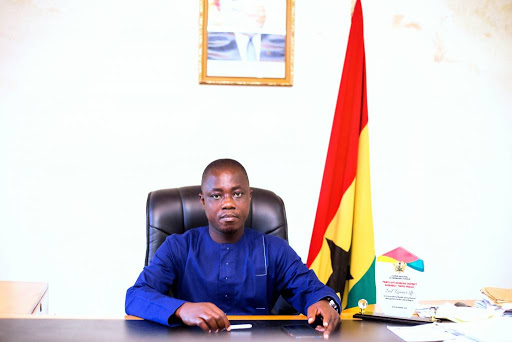 on: May 15, 2021In: General News, PoliticsNo Comments
Print Email

The District Chief Executive of Twifo Atti Morkwa in the Central Region of Ghana, Hon. Robert Agyemang Nyantakyi, has expressed the intent to revisit the reclamation of abandoned galamsey sites in the district in order to turn them into oil palm plantations.

He said a similar exercise was undertaken under his administration two years ago where over 50,000 seedlings were nursed and distributed to local farmers to replant on over 830-acre farm lands which were destroyed as the result of the illegal mining activities in the community.

According to him, this will create the needed jobs for the people and also boost the sources of revenue to the Assembly when the fight against the illegal mining is won. The DCE’s stated intention follows a seeming renewed sense of commitment to the fight against galamsey as announced by President Nana Addo Dankwa Akufo-Addo in his second term.

Following this, the Minister for Lands and Natural Resources, Samuel Abu Jinapor has declared war against the activities of illegal miners along river banks and within forest reserves in the country. Reports have it that over 200 military persons have been deployed to run operations in galamsey prone areas across the country to flush out these illegal miners.

These military persons have been running swoops in these galamsey prone areas including Twifo Atti Morkwa for some few weeks now, where the mining equipment and excavators used for the illegal activities on these water bodies and the forest reserves have been seized and burned on the sites where they are found.

Meanwhile, the illegal mining pits and the destroyed farm lands which have been abandoned, have not been reclaimed. While the issue of a polluted water body is already a source of worry to the local people, these un-reclaimed sites have also come to make matters worse.

“It is about how we can reclaim these lands. In fact, a lot of pits have been created and it is causing a lot of nuisance to the environment and it even serves as death traps to humans as well. It is in our plan that we find a way to reclaim the land and probably plant some seedlings on it. So that we will be able to have a new vegetation. So, for now that is what we are planning to do but to acquire the excavator machines to reclaim to reclaim the land is not an easy task,” Hon. Robert Agyeman-Nyantekyi said in an interview.

He however added that, the required logistics and the needed financial backing has been the main challenge for the implementation of the Assembly’s plans in this direction.

“So that is what the DISEC is currently planning to do. We have the task force ever ready to work, but then the resources are not readily available. Sometimes we find it difficult to even dispatch them to get to the field to work. So, reclamation has been one of the key things we are planning and strategizing to make sure that we get those lands back for useful purposes,” he said.

The District Chief Executive granted the interview when the Executives of the Climate Change and Local Governance Africa (CCLG-Africa), took a tour of the galamsey sites in the district to ascertain for itself the level of damage the activities of the illegal mining is causing to the Prah river and the natural vegetation in the area and how these activities impact directly on the Climate Change phenomenon.