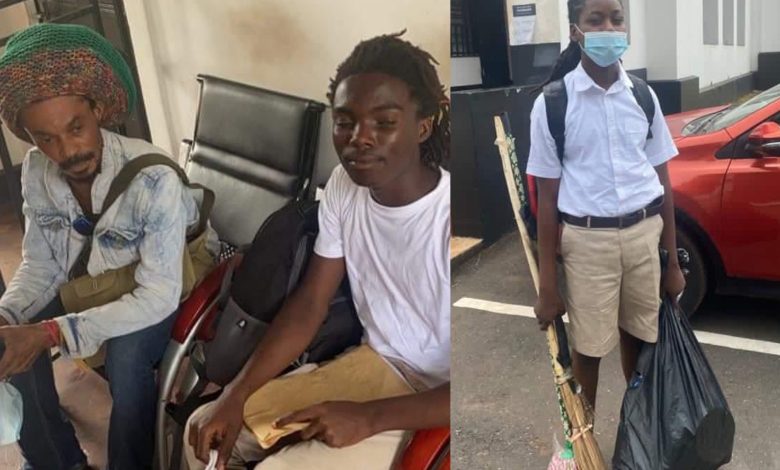 Members of Parliament in the Ghanaian Parliament are diverse in opinion over the plight of two Rastafarian boys who have been denied admission into one of the country’s prestigious Senior High Schools, even though they are qualified academically.

The traditional media and social media in the country have gone agoge with discussions over the decision of the management of the Achimota High School to turn away these two students: Tyrone Marhguy and Oheneba Kwaku Nkrabeah, who wore their long natural hair (dreadlocks), as a symbol of their Rastafarian believes against the rules and regulations of the school.

The controversy has reached fever pitch as various actors have taken extreme passionate positions on the matter. The School authorities have refused to admit the students despite protests from a section of the public while the National Association of Graduate Teachers (NAGRAT) have given the school authorities a strong backing.

An Initial directive by the Ghana Education Service (GES) for the students to be admitted was reversed a day after it was issued and has since been ignored by the authorities.

The country’s Legislators have also waded into the debate with the Member of Parliament for North Tongu, Samuel Okudzato Ablakwa, making a statement on the Floor of Parliament on the subject on Thursday, March 25, 2021.

According to the North Tongu MP, the indefinite stance by the Ghana Education Service (GES) seems to be making matters worse, while indicating that the deafening silence of the Ministry of the Education on the raging matter of considerable national interest was disappointing.
He averred that, to his mind, the controversy seems to be a conflict between fundamental human rights and what defines the notion of discipline in schools.

He quoted portions of the Constitution of the land including Article 17 (2) of the 1992 Constitution to back his point which he said was unambiguous. It says, “A person shall not be discriminated against on grounds of gender, race, colour, ethnic origin, religion, creed or social or economic status.”

Article 21(1) (C) further provides: “All persons shall have the right to – freedom to practice any religion and to manifest such practice.” While adding that Article 28(4) was emphatic that: “No Child shall be deprived by any other person of medical treatment, education or any other social or economic benefit by reason only of religious or other beliefs.”

Mr. Okudzeto Ablakwa added that, “These Constitutional imperatives together with our enviable status as the first country in the world to ratify the treaty on the Convention of the Rights of the Child on 5th February, 1990 impose an obligation on all of us to be circumspect in fashioning out policies, rules and guidelines that if proper care is not taken, could undermine or be injurious to the wellbeing and the rights of the child.”

In their contributions to the statement, the Members of Parliament for Wa Central, Rashid Pelpuo; Builsa North, James Agalga; and Ningo Prampram, Samuel Nartey George, sided with the position taken by the maker of the statement for non-discrimination against the tenets of the Constitution.

However, in a sharp contrast to the views expressed by the maker of the statement, the Member of Parliament for Bekwai, and First Deputy Speaker of Parliament, Joseph Osei-Owusu, and the MP for Kwasimintim, Dr. Prince Hamidu Armah backed the school authorities for their stance on the insistence of discipline in the two Rastafarian boys in conformity with the rules and regulations of the school.

According to the First Deputy Speaker, the school authorities have not denied the two Rastafarian boys’ admission to the Achimota school. He was of the view that the school has only asked the boys to cut their dreadlocks to conform to the rules and regulations of the school which demands that students keep their hair short and decent.

He further averred that those who are seeking to read religious connotations into the decision of the school to deny admission to the boys are rather making matters worse. Since according to him, Rastafarianism “involves the smoking of weed. It includes the smoking of weed and weed is an illegal substance. It is not a substance that is permitted,” he argued.

The MP for Kwasimintim thought that the issue must be observed from a different perspective. He said so far as the boys are bellow the ages of 18 years, the Articles quoted by the maker of the statement to buttress his point of discrimination will not apply to the circumstances of the boys.

He said though people have rights and children have rights to education, these rights must be expressed within the confines of the law. Therefore, the position of the school must be observed within the context of Article 14 (1) (e) which provides a caveat for curtailing some rights of a child until the age of 18 years. It states, for clarity, except “For the purpose of the education or welfare of a person who has not attained the age of eighteen years.”

The debate is still on as even Parliament seems to be divided in opinions over the plight of these two Rastafarian boys whose right to access to education seems to be in a fix, amidst claims of discrimination against the right of minority groups in the country.